Cheery honking cars and mooing cows floated past us as we zipped through the air. Maneuvering deftly in and out of camel groups and racing jeepneys, we left them all behind. Time floated serenely along with us, a wide expanding river through which we rowed swiftly….

Suddenly a squawking bird raced in front of the windshield, and I opened my eyes. Twenty minutes had elapsed, and my taxi had seemingly not inched forward on our way to the scientific ruins of Jantar Mantar, an eighteenth century observatory located in Jaipur, India. I checked my wristwatch and realized if we ever arrived at my destination, the site would be closed.

Real time had stopped still since I had found myself pinned inside a roasting taxi, firmly embedded in folds of wooly traffic on the road towards Jaipur’s City Palace. We were at a standstill engulfed by the clamor of a thousand tinny horns. Everyone else, including a camel and two fat cows surged forward. I glared at the back of my driver’s head, but he seemed oblivious to any opportunities as he merrily hummed along to a cadenced Hindi radio pop song.

I wanted to yell at him, “Chalo, chalo (let’s go, let’s go)! Don’t you know we will be late?” Instead I silently seethed and outwardly sighed several times, willing him to move. Nothing.

“Do you think we could make some way forward?” I meekly asked him. A pair of wizened eyes turned to give me that look through the rear view mirror.

“I knew that look well: everyone used it on me in India.”

It was the stare of stoic disappointment. I knew what would follow too. I saw the backs of his shoulders rise and fall and two slender be-ringed hands let go of the steering to form a plate over his right arm.

“And where would you like me to go, madam?” the man asked calmly. “Is there an empty road I am not seeing?” I bent my head back on the cracked plastic seat and bit my lip in frustration.

“Madam,” he continued with a right-to-left toss of his head, “I am doing my best. I am only human. If I had the wings of Hanuman I would gladly take us away from here, but as you can see,” he said, indicating to a space the size of a sedan that just opened, “I can do nothing.”

“There! Right there!” I wanted to scream back, wildly gesturing at the gap, “Move in right there! Move in before someone else does!” A sleek Mercedes deftly dove into the spot and we were left standing in the same position.

“At this rate, we will never make it to Jantar Mantar,” I complained, clenching my fists.

My driver grinned at me and turning his head with a slight tilt to the side said, “Don’t worry. We will make it to Jantar Mantar with plenty of time. You will see. You are my passenger, so you should relax instead of all this stressing. Enjoy the ride!” I scowled back at him, but he was right. The only way to evade this situation was to shut my eyes and feign sleep. I slid uncomfortably into the awkward hollow of the backseat and inaudibly counted backwards from twenty….

Time in India is my enemy. It strips whatever veneer of composure I have to awaken the snarling beast of irascibility within. It cripples my ordered coherent self so that I become a badgered needler of time keeping, always checking my watch, always tapping my foot, craving the next moment to come and the next and the next in a defeated attempt at efficiency. 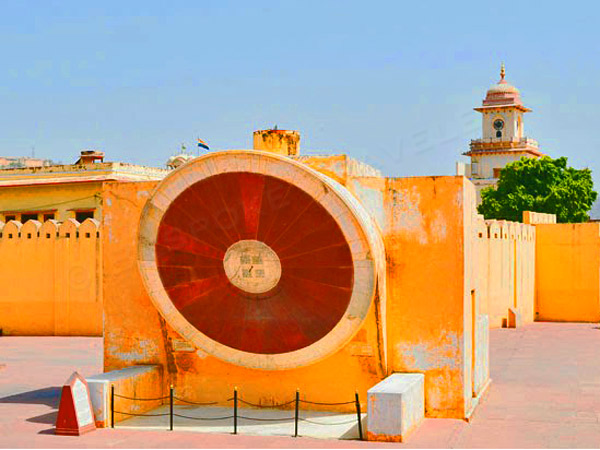 When I opened my eyes we were parking outside the gates of the royal observatory and the sun had melted leaving the sky awash in swathes of carmine and ochre. The heat, however, had not abated and it stirred the tawny dust into mindless swirls. The site looked closed to visitors, its metal portals shut, its one-man ticket booth empty.

“All I could hear was the lonesome call of evening doves trying to soothe my nerves.”

Sunjeet, my chauffeur, emerged triumphant from his taxi as I peeked past the grilled entrance.

“You see madam, as I promised, here we are at Jantar Mantar.”

“No, no, no,” he gleefully insisted, “I promised you would see the place and we shall see the place. Not to worry,” he added with a smirk, “I have a friend who will come to let us in.” I highly doubted this, but we sat down on the trunk of his taxi to wait for this mysterious companion.

More impatient pacing from me, more muttered oaths, and the increased certainty that if I did not see inside those gates my experience of India would be a failure. After two phone calls from the driver a lad dressed in a collegiate sweater showed up and unlocked the doors.

“See,” Sunjeet declared, “I promised you. This is my friend Nikhil: he is going to be our guide.”

Nikhil grinned Cheshire-cat fashion and hopped towards me, hand extended. “It is a pleasure madam! I am so excited that you are here to see our ancient astronomical composition. If only more people would come to appreciate what a beautiful piece of history we have here.” I nodded politely as he rambled on and sidled towards the gates, begrudging every minute they remained locked.

The interior looked like a jungle gym for giants: odd wheels hung in the air, half-walls of buildings stood mute, and staircases led to nowhere. Sunjeet, Nikhil, and I walked down the trimmed main path towards a pair of Stonehenge-like columns set in a closed circle.

“These,” Nikhil explained, “chart the altitude of the sun.” We moved onto a brass tube inserted through two metal rings. “These determine the angle of the stars from the equator.” Deeper in, twelve random staircases facing different angles sat upon a patch of concrete tiles like chess pieces waiting to be moved, representing the zodiac signs. Next to them a sunken map of the constellations stared up at the cloudless sky. A handful of multi-sized sundials made up the rest of the park. Everything bent on measuring time as accurately as possible was built here and all of it abandoned as the restless city outside the walls continued to battle its way into the future. 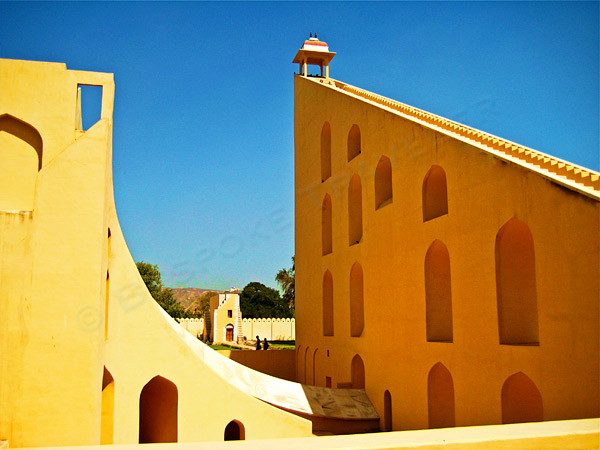 Climbing up the steps of the Samrat Yantra, a twenty-three meter crop forecaster, Nikhil said, “Maharaja Sawai Jai Singh the second was a lover of astronomy, but he was also obsessed with time. He desired higher accuracy in calculating time and believed it could be achieved through larger instruments. Hence, the immensity of this place.” He stopped speaking, and we both stood inside the covered chhatri silenced by the monumentality of the implements below.

I thought of the curious way time warps for us, changing and shifting its length according to our circumstances, never adhering to our standards no matter how many ways we seek to constrain and compute it.

“I can recollect younger summer afternoons when time lazed with me, crawling to a standstill.”

Yet, every New Year’s Eve gallops to an end in the company of friends. I delight in efficiency and busyness, eyes always looking ahead to the next task, the next assignment, the next bend in the road. India has prevented me from doing this at every turn: hampering me on the highways, rerouting my itinerary, derailing my understanding of progress. 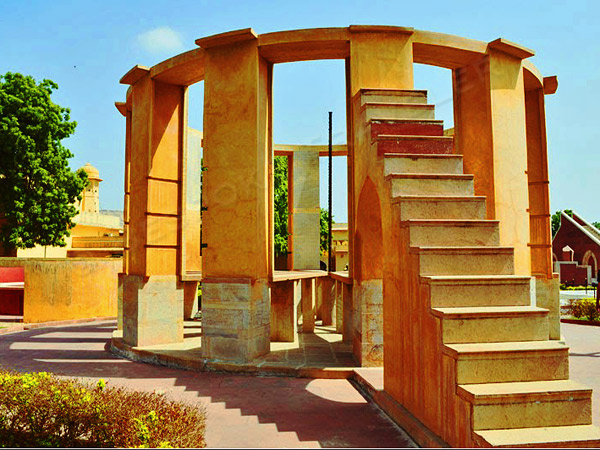 In his treatise “On the Shortness of Life,” the Roman philosopher Seneca wrote, “As soon as it comes to squandering time, [people] are most wasteful….They are trifling with life’s most precious commodity being deceived because it is an intangible thing.” I looked at all the grotesque sculptural forms lying before me and wondered if I was wasting what I had believed to be a life of productivity. I saw all my hurried moments in a different light here at Jantar Mantar: I had presumed that I was master over time, segregating it into distinct compartments for various aspects of my life. I prided myself on being early to appointments, on never allowing myself to dawdle, on handling time skillfully. It is ironic that I, like Sawai Jai Singh II, have dedicated much of my life to gauging time with greater accuracy, requiring it be strapped to my wrist while jotting its ticking power into journals and calendars. Yet I have allowed it to pass unnoticed in my life, never appreciating its fluidity as I seek to fill every minute of it energetically. Instead of owning time, I have been under its tyranny. 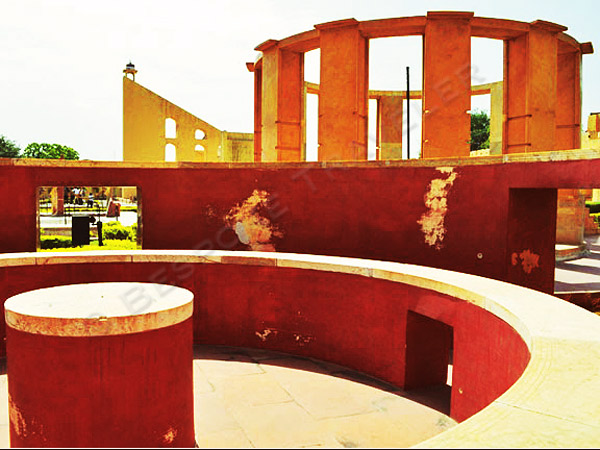 “What is essential is invisible to the eye,” the Little Prince once said. In the waning Indian light, I found I had been blind to the beautiful elasticity of time and what a gift it has been to me. I spent too many years limiting myself, mistaking haste and rashness for proficiency. The mammoth sundial, the heavenly cartogram, and other horologic apparatuses make me rethink my distaste for delay.

“The secret to understanding India is proper timing.”

I need to be able to flow with time here, to sway and twirl with it as if it were an intricate kathak dance. The pleasure of lingering and the art of delay are subjects I need to practice from now on.

Darkness subsided over the mustard colored devices. Nikhil and Sunjeet lolled against the outer wall, smoking, waiting for me to leave. I made my way towards them, but for a few minutes I paused next to Jai Singh’s Narivalaya Yantra. The cooing doves hushed their calls and waited with me, embracing the unhurried passage of time in India.

A keen astronomer, Jai Singh realized the lack of celestial knowledge in India on a visit to the court of Mughal emperor Muhammad Shah in 1719. During the next two decades, amid fighting liege wars and preventing invasions, Jai Singh managed to design and build five observatories throughout his provinces. Jantar Mantar, in Jaipur, is his largest and the best preserved of the lot.

Under what circumstances have you noticed the elasticity of time? When has it sped up for you or slowed to a crawl?