Taking Chances With a Ghost Town

Fatehpur Sikri was a revelation. The ghost town unfurled its cinnamon sandstone storied pavilions like a pop-up book. Dado paneled quarters materialized atop stepped terraces. Gujarat carved brackets and Persian calligraphy entwined themselves into sculpted chambers that imitated the sumptuous look of carved wood. Here, no monumental marble palace domineers the landscape and no inlaid jewels adorn facades. Instead, geometric fretwork lightens the earthy red tones of the edifices, and walled courtyards define private sections from public ones. I was in Fatehpur Sikri by accident. I had never heard of it before embarking on my exploration of Agra, India. A casual conversation with the taxi driver, Sunjeet, on my way out of Agra revealed my ignorance and prompted him to take me on a detour. Walking with him among the abandoned courtyards, I feel I am the only one to see the place in a thousand years. 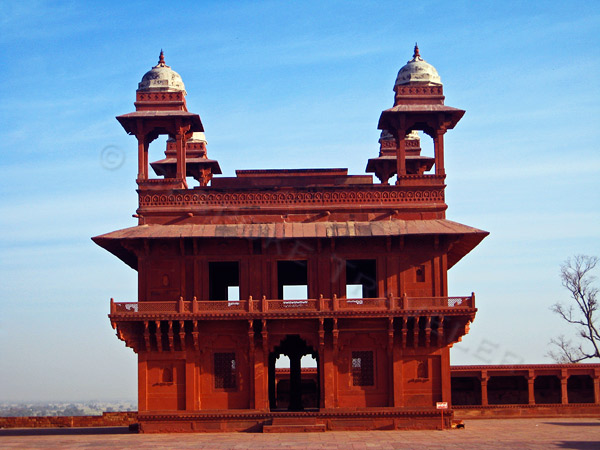 The town itself came into being by accident. Anguished about having no heirs, the Mughal emperor Akbar made a pilgrimage by foot from Agra to this nonentity in the desert to seek the advice of Sufi mystic Salim Chishti. The revered saint predicted a son in Akbar’s future, and when his wife Heer Kunwari gave birth to Jahangir, Akbar in gratitude moved his entire court to Chishti’s hideaway.

“It was a quest of hope which lead to a chance encounter and the birth of a capital.”

Fatehpur Sikri did not have a long life: after only fourteen years, the king abandoned the town in favor of Agra. The reasons for the withdrawal are a mystery, part of the allure of this magic hamlet. Its other charm is in the careful yet unaffected way in which Akbar’s architects were able to amalgamate the designs of four disparate cultures.

The layered vermilion pavilions look like tents splayed out on an encampment. There is a fluidity here I have never seen at a palatial complex. A shrewd, and for his time liberal-minded sovereign, Akbar was able to forge a cohesive empire that consisted of a massive populace whose cultural roots were antithesis to his own, a variegated landscape, and three separate religions. The court here represents the microcosm of this amalgamation both in its architecture and its functionality.

“It is a testament to the exquisiteness of building on the collective shoulders of the past.”

I have seen the charm of Jain rock-cut temple cities, the impressive Islamic symmetry of minarets reflected in a rectangular pool, and the stunning bas-relief of Hindu sanctuaries. Each of them are individually resplendent in intricacy and innovation, but at Fatehpur Sikri, where these three types fuse together, architecture elevates into euphony. Guardian beasts inspired by Jain myths, Persian open-bayed Audience halls, and Rajasthani domed chattris become an opera where the singular voices of three melodies harmoniously fuse into a soul-lifting composition.

Inside the Hall of Private Audience I gaze upon Akbar’s pillar, a square base upon an octagonal shaft supported by serpentine brackets. Four bridges connect to the raised circular platform in the center of the room. The room may be empty but I can see clearly the phantom of Akbar debating religious dogma with his Hindu, Christian, Muslim, and Zoroastrian sages. Intensely interested in life, Akbar loved to ponder and discuss the eternal questions of faith, morality, and justice. Fatehpur Sikri is the embodiment of what occurs when we let go of certainties and rules. Built on a whim, relinquished just as fleetingly, the summer breeze still carries the multicolored thread of discourse that must have kept the capital humming with animation.

“Out in the courtyard melodies of poetry weave their magic through the piazzas.”

I imagine they are the wisps of masterpieces created here by Akbar’s Persian poet laureate Faizi and his Hindi lyricist Raja Birbal. The monarch’s passion for philosophy was matched by his appetite for art and music. At Fatehpur Sikri he had an assembly of nine virtuosos: the jewels in his imperial crown. Sitting on the elevated rostrum in the center of Anoop pool, I almost hear the dulcet tones of renowned musician Mian Tansen regaling the vanished court with his enchanting tunes. This is indeed a ghost town, one still pulsing with conversation, song, and laughter. The artisans, courtesans, and gurus have merely stepped out for a moment; even Akbar will presently retake his place upon the spoke of his aesthetic wheel.

For all his flaws, I admire Akbar’s ability to embrace uncertainty and reap the benefits of his era. He reminds me of the enigmatic character of Too-Ticky in Tove Jansson’s book “Moominland Midwinter.” Both took deep joy in the act of questioning and both focused on discovering what the world had to offer them in the present. Travel is a great tool for examining reality, yet too often I protect myself against its variabilities and prevent myself from experiencing its true exuberance. I never planned to see the treasures at Fatehpur Sikri—it was not in my itinerary. Yet here I stand, savoring its exploration as if I had made a new friend. We live in uncertain times and always will; however, rather than lamenting it I should take advantage of the opportunity chance provides to learn and to discover.

“I should be watchful for the unexpected, not out of fear but out of curiosity.”

If Akbar had not been open to influences outside of the philosophical box he knew, Fatehpur Sikri would never have emerged and the India I observe would never exist. Standing on the daïs where vocalist Tansen regaled Akbar with birdsong and ragas, I recite the words of Rainer Maria Rilke from his “Letters to a Young Poet”: “Have patience with everything unresolved….Perhaps someday…you will…live your way into the answer.”

This dreamlike town has tempted me to withhold looking for the answers all the time. I may never learn how to embrace chaos, but I can try to use chance as the window to traveling a life full of twisting surprises. So, here’s to not always sticking to my itinerary, but veering off the highway in order to explore a village that catches my eye. Here’s to dedicating my journeys to cultivating the art of finding opportunities. Here’s to learning how to feel inspirited while all about me the maelström rages.

On the outskirts of Fatehpur Sikri is a tower known as Hiran Minar which overlooks the royal complex. The tower was once decorated with elephant tusks from which lighted lamps would hang during the evening as a guiding lighthouse for travelers nearing the caravanserai located nearby. A climb into its watch pavilion shows the entrancing layout of the forsaken city.

Welcome to the Snack Corner – Have a virtual cup of chai and some chaat. Then share your thoughts: 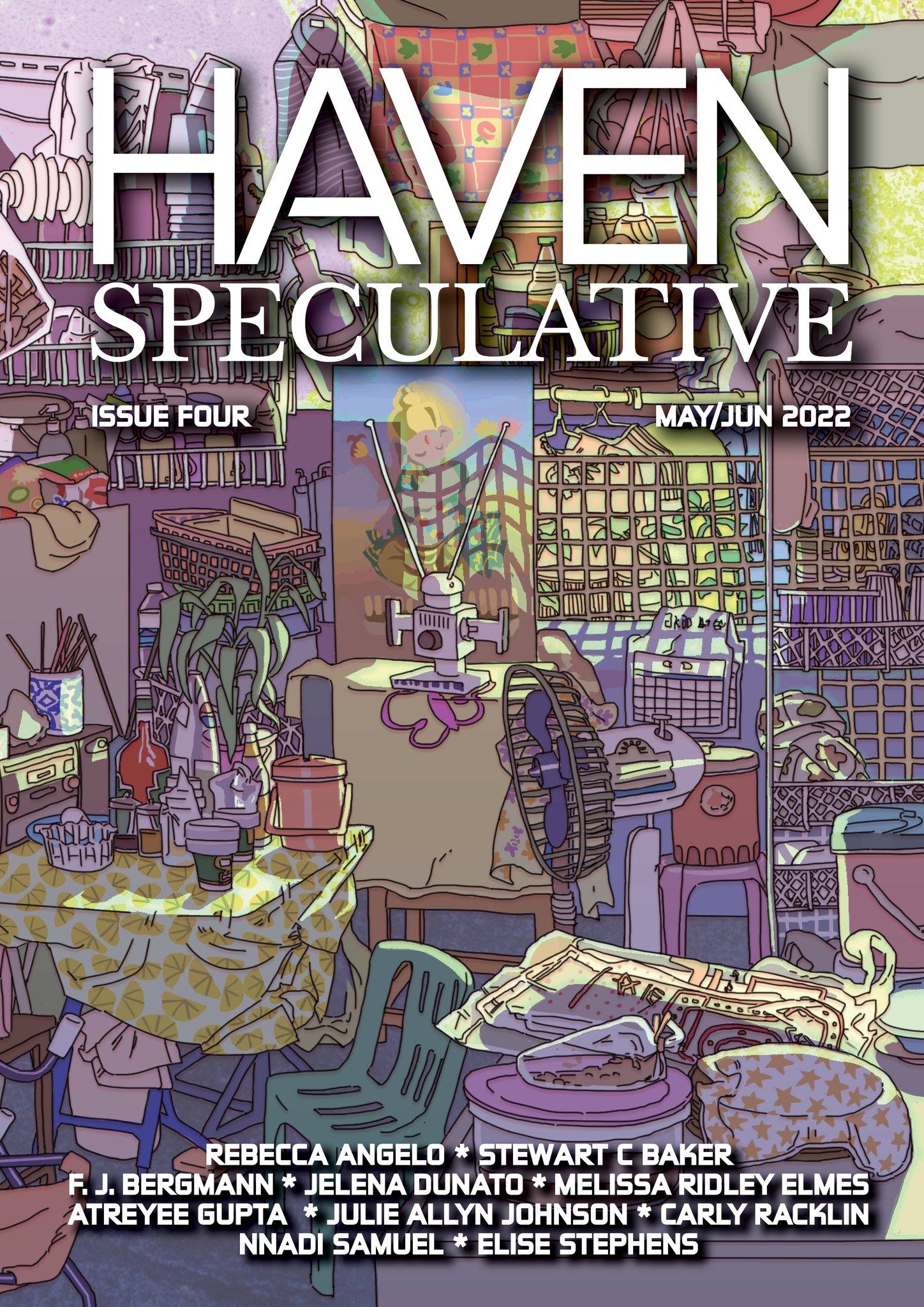