How To Be Successful in Lyon

They were hidden somewhere in the city, a friend of mine had said to me. It was all I needed to hear to peel off for the purlieu of Lyon, a city perched in the Rhone-Alps region of France. Intimate the words “treasure” and “hidden” to me about a destination and I turn into a Clive Cussler character raring at the bit to investigate, unearth, and expose. The “they” in question were traboules: secret passageways built during the fourth century to connect the houses in the town with the precious waters of the river Saône. The trouble with hidden treasures is that they are never easy to discover. The traboules of Lyon are concealed by innocuous looking ancient doors, the same type of ancient doors that guard the entranceway of every other Medieval building in Vieux Lyon. At the moment I was fuming as I stamped my way from alley to shadowy alley searching for a door that would lead me to my coveted traboules. 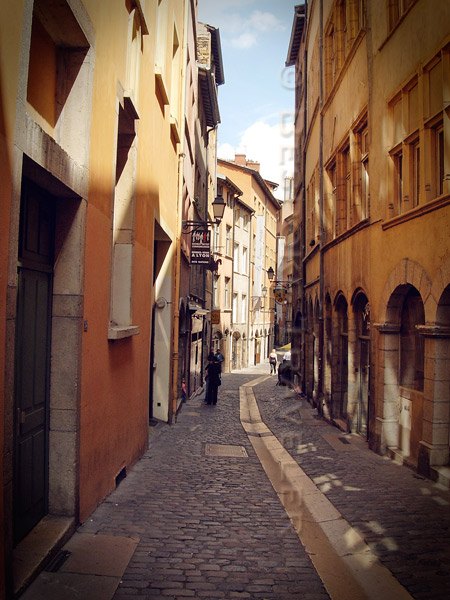 Was the morning air crisp and cool among the cheek to jowl windowed edifices in Lyon? Perhaps, but I wasn’t in the mood to notice. Were the back streets romantically subdued in the early sunlight? Equally possible, but I had no thought for them. I was, instead, hopelessly preoccupied nay obsessed with finding a traboule, any traboule. If I could come across just the one, I thought, my time in Lyon would be successful. I put out my hand to try a deteriorating wooden door in moss-green when it suddenly opened from the inside and let out a girl in a school uniform.

“Pardon me,” I ventured to ask her in French, “but is this one of the traboules?” She shook her head in reply.

“There is one three streets down from here on rue Violi,” she answered helpfully. I thanked her and tripped along towards the street in question delightedly humming to myself at the thought of finding one of the passageways. On rue Violi there were three doors that looked like they might lead me into Lyon tunnels: one with double doors, one with a door that could fit a horse, and one with a wrought iron gate. They were all firmly locked against me. Through the iron gated route I could faintly see a few steps and three different trails feeding into it.

“My treasure seemed so close and yet so unattainable.”

A wave of misery hit me as I contemplated not being able to explore further. My heart was set on spending hours investigating the fascinating interior ways of the city and now that I was unable to access even one of them, I felt at a loss. Where should I go? What could I do? I did not want to give up on my hunt for the secret thoroughfares, but I felt that I needed to redirect my energies. I was here to discover Lyon so one way or another, I was determined to know the city better.

A bus stood patiently at the corner of the street, and not knowing what else to do I hopped on. I was not aware of its circuitous route or the stops it took along the way. I could only think about the great disappointment I faced in not being able to get to know Lyon the way I wanted. I saw gently decaying yet stately houses standing shoulder against shoulder, grand cathedrals peeping out from the tops of hillside trees, and an endless crisscross of cobbled stones yet I noticed none of it because I was too busy figuring out how to get into those elusive traboules. The bus stopped again and a large tour group which made up almost the entirety of its passengers unloaded. I was intrigued as to where they were headed and decided to clamber down with them. The group purposefully walked into a tiny opening along a row of shops and bars. I followed them. Inside I found a tiny museum crammed with ancient working looms, hanging faded fabrics, and spools of colorful threads. An English family of four was whispering excitedly to each other in front of me.

“Excuse me,” I murmured to the father who was half turned my way, “what is this place?” He gave me a look of surprise, as if incredulous I didn’t know.

“Why this is La Maison des Canuts,” he replied softly.

“The house of the canoe? What is that?” Stupefied by my question, he stood there speechless, while his two daughters giggled at me.

“Your first time in Lyon, is it,” his wife asked. I nodded and was about to tell them my tale of woe, when she grinned and said, “You’re in for a treat then! This is a museum dedicated to the ‘canuts’: the famous silk weavers of Lyon whose skill and use of jacquard fabric was unsurpassed during the nineteenth century. They say we’ll actually get to see how the weavers made the fabulous royal textiles. There’s even a shop here for buying handmade Lyonnais silk cloths! Come along, stick with us and you won’t miss a thing.” As they encircled me into their group, I decided to make the most of my opportunity and dive in. I could not gain access to my traboules, but I could discover another part of Lyon’s history: the lives of its famed silk workers.

“Click, clack, click, clack,” sang the batten as it dropped repeatedly against the loom frame. The twin treadles responded, “clickety, clackety, clickety, clackety,” in a musical rhythm that filled the tiny space. Multiple shuttles carrying many-colored threads wove in and out like buzzing bees under the skillful hands of the weaver. Out of this churning melody a cascade of hairline filaments meshed together and slowly metamorphosed into a beautiful blue-and-white fleur-de-lys pattern before my eyes. I imagined the sound of hundreds of looms snapping, popping, and clicking away in Lyon’s silk heyday. I imagined the families that lived in these crowded and loud apartments, slowly weaving chaotic noise into priceless fabric. I learned about the grueling conditions in which the laborers worked. I listened to the details of the Canut Revolts which tore this town apart. This was a different Lyon than the one I had dreamt of finding along the hushed corridors of forgotten passageways. 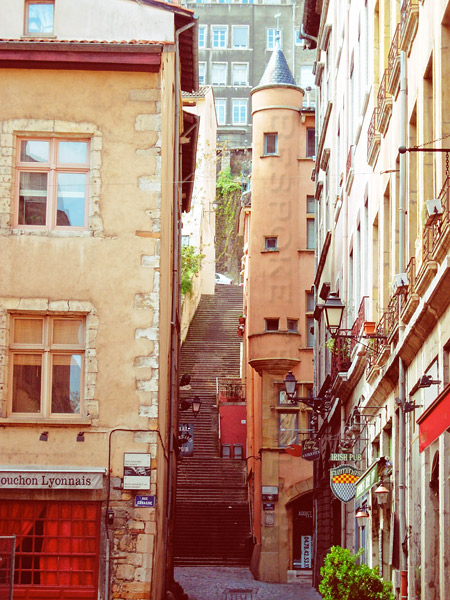 As I looked around the silk room I thought about the nature of success. I had just learned about how the Lyonnais canuts had created a successful economy for their city out of the misery of their harsh lives. I had seen first hand how the arduous labor of silk weaving successfully fashioned sumptuous articles. As for me, even though I had not seen my coveted traboules, I was successfully getting to know another side of Lyon. The key to success seems to be coping well with disappointment. I could have wasted the rest of my day hunting for inaccessible traboules, dispiritedly wandering the streets of Lyon. Instead, I had decided to change tactics, try something different, and it had paid off. As a traveler, I am constantly battling setbacks. Delayed flights, cancelled plans, and closed sights are only some of the tribulations to come my way, but each of these should be an opportunity for me to search for other possibilities. Life is full of locked traboules. How I manage to steer around them and move on will truly be the measure of how successful I become.

During the Renaissance, silk weavers and traders emigrated to Lyon from Italy and slowly developed the city as an important European trading point. Over time, Lyon came to be known for exquisitely crafted textiles and superb woven designs in the silk industry. In 1831 the price of silk dropped, causing the Lyonnais canuts to start the first of several revolts against their manufacturers for better working conditions. Though the uprising was unsuccessful, it inspired many other Industrial Age European workers to fight for better living standards for themselves and their families.