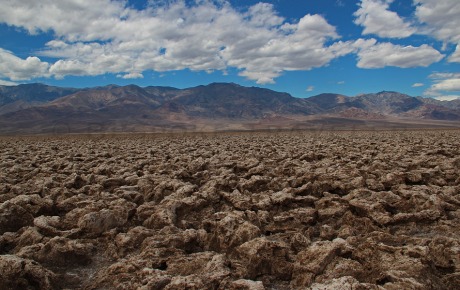 Around me lay an ocean of sand dunes, broken now and then by scrub brush and solitary petrified branches, which I was using as trail markers. I stared behind me trying to locate the previous lone dead tree trunk I had passed, but it was lost in an expanse of quartz crystals. As I stood on the slope of my hill, the warmth seared through the bottom of my hiking boots until I felt I was walking on top of a lighted grill. I took a look at my right sole and found the rubber warped by the high temperature of the sand. I was in the lowest and driest part of North America. For three days and two nights I had also been inundated with some of the hottest temperatures in the world. But I wasn’t going to let Death Valley get the better of me. 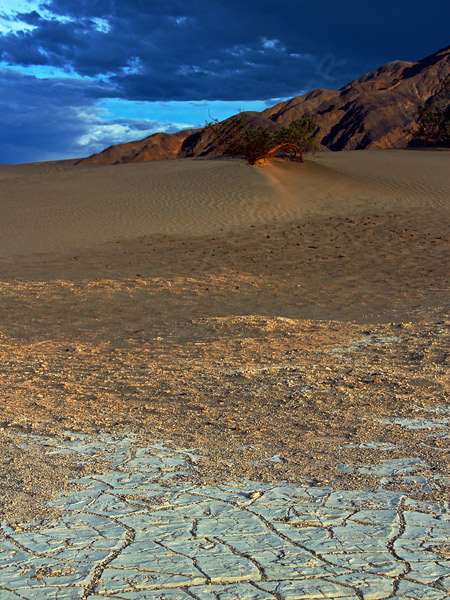 I had weathered closed mountain passes, a flat tire, and an overworked transmission to get to this remote southeastern corner of California. Briefly a destination for early nineteenth century miners, Death Valley is the largest national park in the lower forty-eight states. America’s national parks are ideal places for me to recharge myself and I was at Death Valley to experience its unique landscape of eerie salt pans, spooky dry lakes, and otherworldly sand dunes. I had never camped in the desert before and, although friends had urged against the visit, I was keen to find solitude among the cacti and prevail against Death Valley’s harsh conditions.

I huffed and puffed my way to the top of one of the sand dune peaks for a desolate sight.

“A single speck of black wheeled slowly high above my head.”

That bird and I appeared to be the only late May visitors to this unfrequented portion east of the Sierra Nevada range. As we surveyed our empty domain together, a dark scowl of clouds appeared in the distance. A tiny vortex of sand began to form at my feet and the sand became airborne forming itself into curtains around me. The wind suddenly whipped towards me and it felt as if a million needles were stabbing my face, bare arms, and exposed legs. I furiously wiped my eyes and mouth as I slipped and slid my way off the hillock. Sand continued to fly into my mouth and nose, stinging my insides. Staggering forward in the sinking quagmire, I managed to place my head scarf over my lower face to keep the sand out. I was running towards what I hoped was my parked car, but the sand was now a heavy and painful fog encircling me so I could only hope for the best.

I muttered oaths from behind my cloth muffler as I struggled forward. The sand storm had me bent over in half with my hands covering my neck, throat, and the flapping kerchief ends. All I saw anywhere was bits of sand, like beige colored snow, whirling around me.

“Suddenly a dark form appeared on my right crouched against a large sagebrush.”

I stopped in my tracks, unsure whether to avoid it or ask it for help. My continued staring must have caught its attention, because the shape moved towards me in a stooped and awkward maneuver. As it came closer I realized it was a fellow adventurer.

I was grabbed by the arm and pulled towards the bush as a disembodied voice demanded, “What are you doing?” I found myself being pushed down into the sand behind the sagebrush.

“I’m trying to make my way out of this place,” I shouted at my new-found companion.

“Are you crazy,” she shouted back, “you can’t fight a sand storm! You have to lie low and let it run its course!” 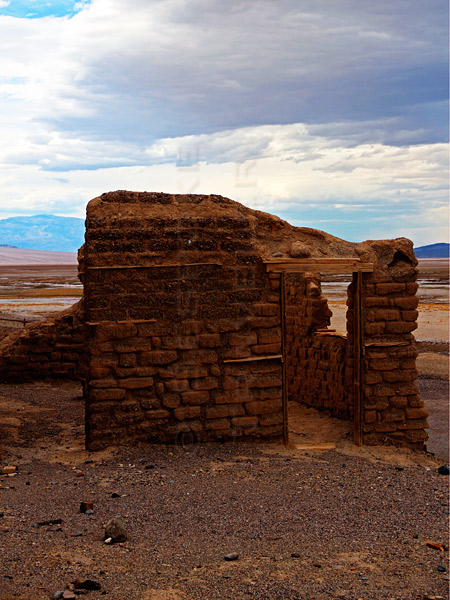 While the two of us hunkered down next to the protection of desert scrub, I examined my rescuer. In distinct contrast to my shorts, tee, and head scarf, she was clad head to toe in khaki with ski goggles over her eyes. Camouflage colored balaclava, gloves, and sturdy pair of boots kept her well protected. She pulled out a water bottle from a small pack on her back and offered it to me. I shook my head politely and pointed to my own giant rucksack. She mimed that I should huddle down and cover my head, which advice I promptly followed because even the bristly branches weren’t enough shelter from the vicious fury of the sand.

As I silently cowered under the rage of the storm I wondered what would have happened had I not been rescued. I pictured myself wandering in an endless whirlwind of sand as it relentlessly chiseled away at my body.

“I’m always combative against what life dishes out to me.”

On every journey I feel the constant need to battle against circumstances, but a stranger’s advice showed me that fighting isn’t always the answer. In a sandstorm the best course of survival is to squat low and let it pass over you. I realized I could use the same strategy in my travel life as well. I hoped the rest of my Death Valley trip would be without mishaps, but whatever happened I would try to roll with the punches.

Eventually the wind stopped howling like a lost coyote in the wild. I raised my head cautiously and found that the sand was settling back into untrammeled swathes before me. The storm was passing and I could finally see ahead of me. I arose slowly from behind the sage brush and turned to thank my lucky stranger but she seemed to have vanished with the storm. I searched around the area but could see no sign of her and eventually made my way back to my car. There were still salt pits and lake beds for me to explore, but I turned back towards the Mesquite Flat dunes and belted out “thank you.” I hope that my timely rescuer, wherever she had disappeared to, heard me and understood that she had not only saved my life but taught me an invaluable lesson.

Death Valley National Park has a diverse desert geography. Aside from the Mesquite Flat sand dunes, salt flats and badlands can also be found here. Despite harsh conditions the desert environment is home to two species of native fish and twenty-three types of plants found nowhere else!

Were you ever caught unaware in a storm? Have you been to Death Valley National Park?