Stepping Into the Void 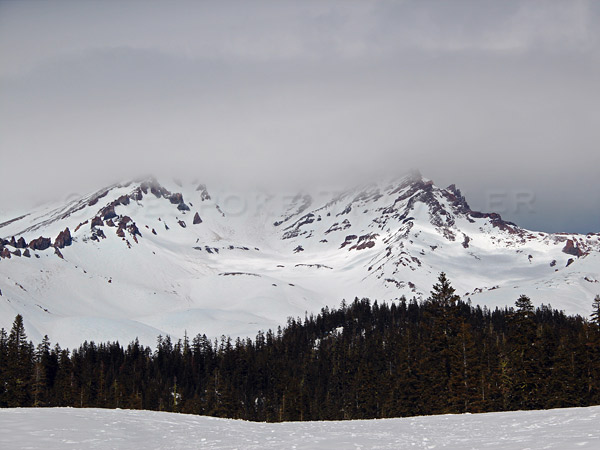 In front of Jesse, the white slope of Mount Shasta glowed rose-gold in the late evening sun. The maquis landscape was weathered and austere, the few trees squatted near each other for comfort and the lone creek by which they had made camp trickled cold and clear. As he watched the colors transform on Shasta, he thought about the months of planning and physical preparation that he had undergone for this adventure. An avid outdoorsman and travel photographer, Jesse was used to tireless gallivanting rounds. Yet, in recent years, he had felt physically unchallenged by any of his adventures. He remembered fondly completing the Boston Marathon, an experience where he had pushed himself to the limits and accomplished something he had not thought possible. A story he had heard long ago kept repeating in his head:

A woodsman felled a tree in which a bird nested. The bird returned to the stump in search of its home. The woodsman, pitying the bird, tossed it into the air in hopes it would find another dwelling. However, the next day, and the day after, the bird came back to the stump. Each time the woodsman sent it back out. After a week the woodsman no longer saw the bird. Instead, he discovered its feathers lying upon the stump. For fear of going beyond its safe haven the bird had perished.

Jesse felt like the bird, too comfortable with his routine. He craved the promise of setting off in a new direction, he wanted to prove to himself that he was still capable of attaining a goal to which he bent his will. A like-minded friend had been dreaming of escaping his sedentary life to climb Mount Shasta, on the southern end of California’s Cascade Range, unguided and the two recruited an ex-military entrepreneur and a back-country loving college kid to join them. Together the four-man team would embark on a psychological journey that would pit them against unknown elements.

Their initial plans had gone awry the moment they arrived at the mountain’s base. The trusted and well-researched Avalanche Gulch Route had to be abandoned because unseasonably early dry summer conditions made the loose debris and scree-covered trail hazardous. For several of them, including him, it was their first time conquering a mountain over 14,000 feet in elevation. Passable routes that did not involve highly technical climbing were few. One of them was the Hotlum-Bolam Ridge path on the northern face of Mount Shasta. A coarser trail, it began lower in elevation but required more time to ascend due to its steeper terrain; time they did not have since the majority had to return to work once the weekend passed.

“Jesse realized that no amount of forethought could ensure his team’s success against the vagaries of the highland environment.”

As expedition manager, he would have to reassess every decision he made on behalf of his companions; he would have to constantly weigh the thrill of reaching the top with the safety of each member. Life and death hung in the balance of every choice he made moving forward. Somehow they would have to muster up the speed and strength to crest the Hotlum-Bolam trail.

At four o’clock in the morning the party left high camp at 8,500 feet (2,591 meters) to begin the arduous trek to the summit. Darkness blanketed them, making sky and land indistinct. Their meager headlamps only highlighted scraps of boulders. Jesse had rarely experienced such absolute blackness. Far above little pin pricks revealed the stars. Miles ahead of them matching pin pricks darted and wavered, showing fellow explorers making headway. Unsure of footing and dreading unseen pitfalls, the foursome meandered upwards, switching back and forth on the unmarked trail. The tree-line disappeared and the grey rocky terrain stretched relentlessly in front of them as dawn broke. In the first flush of day, Jesse made some unfortunate discoveries: their blind stumble in the night had led them in a circuitous route towards the peak, their water supply was dwindling, and the air was thinning.

By the time they reached their first chute, called “The Step,” at 13,000 feet (3,962 meters) the limpid sun was glowering in a cloudless sky. It was going to be a beautiful day, but Jesse and his mates were preoccupied with other matters. Every inhalation was a struggle and the wind had whipped itself into such a fury that wrestling against it proved futile. The topography here had begun to form sharp fins and towers behind which each of them hurried to find meager protection. The slope steepened as well, precipitating the men to bend forward at the waist in order to advance. Each step for Jesse was becoming increasingly difficult. He debated whether to increase their rest times, but the longer they halted the longer their path to the apex.

“The trail narrowed and the pitch dropped off on both sides so that the world below lay in an ecstatic swirl of azure and white.”

The sight made Jesse’s insides churn and for a moment he had to recalibrate himself. From his sparse perch behind an outcrop he watched the others wheeze and pant as they grappled on. A small part of him wished they would speak aloud what all were thinking: happiness would be to turn back from this pursuit. He knew, however, that he would regret it if he made such a resolution for them.

The trail took a sharp turn to the right and expanded into a massive sheet of ice. To head up they would need to negotiate the Bolam Glacier. Though all had crampons and ice axes the group was taken aback by the impediment of crossing the glacial traverse. They were not roped to each other so it was each man for himself on the sheet of glass. The sheer incline of the strait meant that there was nowhere to move but skyward. There was also no trail here to follow, it was up to each climber to slash his own way through. His limbs were numb with fatigue but Jesse forced himself to carefully place his feet into the snow before stabbing the axe into the ground until it held firm.

“There was no room for mistakes here; a short misstep and he would plummet down the glacier’s face.”

Suddenly he heard a rumbling sound above him and a voice shouted in warning. Clutching his ice pick for support he dropped to his chest and flattened himself. Several boulders tumbled past a few inches from him and careened onto a rock tower below. Another party of hikers was inadvertently causing a mini-avalanche of scree to fall down upon him and his friends. There was nowhere for them to shift in order to avoid the falling rocks. He motioned for the others to keep trudging up, as quickly and cautiously as they could. The faster they got off the canvas of ice, the quicker their escape from the stony barrage.

Rocks continued to cascade as the last person in his group navigated out of the ice mass and onto a snow field. The end seemed so maddeningly near at hand. “Just a few paces more,” Jesse told himself and his companions to encourage them. However, when they mounted the snow-capped area there was still another 200 vertical feet to maneuver towards the pinnacle. The remaining distance after reaching the false summit snapped the thin wire of hope in him, but they were so close and the weather so ideal that not summiting now would be unthinkable. He knew they had to persevere, though the look in their eyes said they had no more to give to this expedition. This was the last push, any more breaks would deflate them. He put his head down and began to count, wiling his feet in front of each other, eyes focused on the square patch directly in front of his toes. The rest of his team followed suit, placing their boots into the depression left by the one ahead.

“One, two, three, four, five, six, seven,” the tally kept beat inside Jesse’s head, the numbers themselves meaningless as the sheer act of computing kept him in motion. He heard the crunch of treads behind him and all around him the snow and clouds mixed together in a whirlwind of white, but he barely noticed. “One, two, three, four, five, six, seven,” the voice inside him whispered, pulling him forward. “Seven more to go,” he urged himself, “only seven more.” How many sevens had he already reckoned up? “Never mind! One, two, three, four, five, six, seven…only one more set…” he tried to convince his enervated soles. Just when he thought his breath would fail him he stepped onto the tip of Mount Shasta. His teammates, silent and torpid, joined him on the top of the world. The northern California valley felt light years away: had they only yesterday been down there looking up? It twinkled below them in the afternoon sun. Jesse savored the moment; not only had he triumphed over his body and mind to get to this spot, his entire team had accomplished their goal. Squatting on his grand lookout he was proud of the decisions he had made along the journey. There were plenty of things he could have done better and choices he could have ameliorated yet at the end of the day he was proud to stand by his judgements. If they had depended on a guide or followed someone else’s advice the road may have been easier or shorter but victory would have come at the cost of self-discovery. He could only master his limitations by hewing his own route. 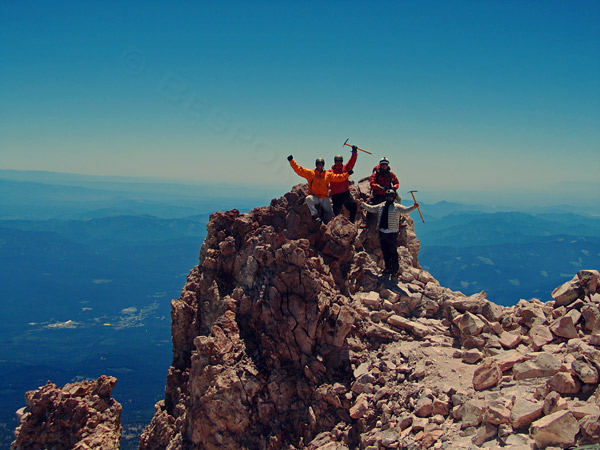 Jesse thought back to the glacier he had successfully spanned as a metaphor for life. His actions on the mountain and his everyday plans were never easy, but they were his own.

“He had never wanted to walk on a road someone else had cleared for him.”

His track was always the one no one had traveled because it was the only way he could know himself and become aware of his shortcomings. When he reached the summit he wanted to be able to respect the choices he had made and feel worthy of the trail he had blazed.

Before climbing mountains or exploring jungles, thoroughly plan your itinerary, gear, and required certifications. Come up with a six-to-eight month training and dietary regimen you can adhere to. Finally, know your limits both physically and mentally so that you may capably battle against unknown elements.

Tell us about any mountains you have successfully summited. What choices have you made that have gone against the grain? In hindsight, are you proud you made them?