The Joy of Sport 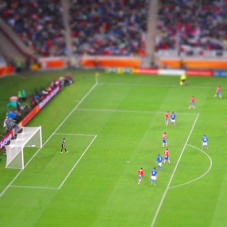 I love watching football or soccer as the sport is known in America.

I enjoy the excitement of team play, the elegance of ball movement, and the relish of a hard won goal. Most of all, I appreciate the deep tradition and camaraderie I find in football. Some form of the modern game of soccer, or association football, has been played by many different cultures from the Mayans to the Chinese, but it’s the public schools of late eighteenth century England I have to thank for grass pitches, basic rules, and some of my favorite stadium chants.

So when I secured tickets to the FIFA World Cup event in South Africa, I was ecstatic. For a European football fan, tickets to the World Cup are the Holy Grail of sporting extravaganzas. I would be present to watch in live action world class athletes whose names are known even to those with no interest in the sport. That the event would be held in Cape Town was an added bonus since I had never been there, but honestly I didn’t give the venue much thought at first. To me, the city signified a giant stadium upon which I would be able to cheer my beloved teams.

I knew very little about Cape Town except for its history of apartheid, but the minute I stepped onto the soil of South African legislative capital, I realized this destination was more than a venue for FIFA World Cup. Cape Town was steeped in history, and not just the tragic one of race relations, but one of green gardens, vibrant local towns, and a melange of African and European culture so interwoven it formed a heritage of its own. Walking the streets filled with cafes straight out of Amsterdam, visiting stores stocked with central African masks, and watching all the international ships anchor at the port, I realized Cape Town had a more global reach than I had originally imagined.

As I made my way about the city, I discovered how Cape Town’s personality made it ideally suited to host a world event. A city that has struggled to overcome its own prejudice deeply understands how to welcome strangers to its house. Whether the locals were football fans themselves, or whether they had never watched a single match, everyone was intent on making sure that those of us attending the FIFA World Cup were made to feel comfortable. Experiencing Cape Town felt to me like visiting an old friend’s new homestead. Since the city offered its past without secrets, it gave me the chance to be an honest guest, unafraid to explore everything the capital had to offer.

My first match at Cape Town’s Green Point stadium astounded me. It wasn’t the innovative design of the dome or the opportunity to see celebrity athletes. I was awed by the fact that I was rubbing shoulders with people from halfway across the globe, cheering with absolute strangers the same goals, reciting chants with outsiders that I had only sung before with my best friends. I was forming relationships over a sport with people I would never otherwise have gotten to know. I came to realize that attending the FIFA World Cup was more than a unique opportunity to see the best national team players compete against each other, it was giving me the chance to bond with the world over my favorite sport.

There is a special feeling of camaraderie amongst the audience at soccer games that doesn’t happen at concerts or theater events. Love of the game, passion for the teams on the pitch, sharing ninety minutes of sun or rain or snow: these create a boisterous companionability between people of all classes and ages. At home, I experienced this with neighbors, family, and friends. Here in Cape Town, I was enjoying the same fellowship with soccer fans from Argentina, Ghana, the Netherlands, and beyond. An uncommon adventure for me and one I found miles away from my doorstep.

More Than a Game

Before arriving in Cape Town, I had imagined I would be spending my entire time focused on soccer. Between going to the games I had tickets for and watching the ones I couldn’t attend, I had left little time for getting to know my host city. However, Cape Town changed that for me. The majesty of Table Mountain, the beauty of the Cape beaches, the serenity of its lush gardens all called to me to explore them and so I did. The more I discovered about Cape Town, the more I wanted to uncover the rest of South Africa. Cape Town’s warm and spirited personality flourished whether I was wandering through its street market, sipping a rock shandy, or talking to locals. Attending the FIFA World Cup halfway around the world was a global phenomenon not comparable to the local sporting events I usually frequent. I never envisioned that a sporting event would allow me to interact on such an international level. Cape Town helped me to have this immersive travel experience by opening itself to the world.

While football has been played in England since the eighth century, the modern game owes many of its rules to those drawn up at Cambridge University in 1848. Players from Eton, Harrow, and Shrewsbury were among the first to set forth a code of conduct on the field many of which is still enforced by the Federation International Football Association (FIFA).

Discover an earthly paradise as we take you to Cape Town’s singular natural beauty in On Garden Paths.