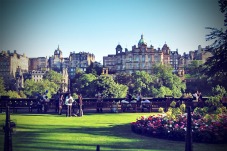 When it comes to Scotland… I am a huge fan of native poet Sir Walter Scott. From the sword of Ivanhoe to the woes of the Lady of the Lake, his flowery words have created a land of shadowed mist, green hills, and maidens swooning. Few other Scottish authors have evolved into literary giants whose allegorical phrases ring forth throughout the centuries. That’s why, when it came to exploring the city of Edinburgh, I figured who better than Sir Walter Scott to show me around town?

Good Rest, Sir Walter
So I met up with the balladeer extraordinaire at his memorial in the Princes Street Gardens. Here he ponders over the old town of Edinburgh with his favorite dog, Maida, by his side. I wasn’t sure what to make of his outfit though: Sir Walter appeared in what seemed to be either a toga or a plush blanket wrapped around his torso. Of course even in summer Edinburgh breezes can be chilly so perhaps he needs it for extra warmth. Scott also seemed highly appreciative of the enormous Gothic style tower surrounding his statue since it reflects his own floridly moody style.

The Castle and its Treasure
Sir Walter’s recommendation to me was to thoroughly explore one of his favorite places in town: Edinburgh Castle. While I’ve heard the castle has plenty of ghosts wandering the corridors, I wasn’t sure if Scott’s more ethereal self would suddenly appear to greet me inside. Especially since he had discovered the Scottish crown jewels buried underneath the castle in 1888. Just imagine, my very own poet turned history detective had unearthed a priceless treasure! Yet another reason I esteem the bard of Scotland. It seemed though that Sir Walter wanted me to enjoy the ancient fortress without his guidance, so I explored the rooms and grounds on my own in the hopes I too would unmask my own stash of riches.

On the way up to the entrance, it seemed as if the castle loomed forbidding and Gothic over the entire city of Edinburgh. Watchful and impenetrable, it looked more like a prison than my idea of an English castle. The massive stone walls rose bleakly up from the volcanic rock as if nature had fashioned the castle rather than man. It was a daunting prospect simply to walk down the long gangway towards the gigantic iron studded wooden doors. Once inside, the castle seemed to protect me as I searched through its multilevel courtyards for any clues to undiscovered loot.

The Stone of Scone
The castle’s vast ceilinged rooms gave me pause once I was inside. Though richly decorated in red velvet and medieval armor, they seemed too inhospitably dressed to harbor secrets. In the royal palace itself I saw firsthand what Sir Walter had uncovered: in the strong room, inside a glass case, supported by midnight blue cloth lay the royal crown, scepter, and jeweled sword once worn proudly by Scottish royalty. Exulted by seeing the goods Walter Scott had discovered, I was even more enthusiastic about finding my own set of riches inside the castle.

I decided to head towards Half Moon battery and David’s tower, some of the oldest parts of the castle, on the eastern portion of the complex. Here, the true sense of the castle’s primary role as a strong siege hold became obvious to me. The rooms below the tower were icy, barren, and sinister. Not a place I would want to find myself in unless absolutely necessary. A perfect hideout for hurriedly stashed jewels, but I didn’t find any. Instead, I discovered that this exact spot was where Mary Queen of Scots fled to have her baby and avoid the wrath of Queen Elizabeth. The commander of Edinburgh castle at the time chose to show her loyalty by harboring her and causing a siege between England and Edinburgh. Allegiance like that is worth more than jewels.

A Treasure of Our Own
My traipsing through the fort finally brought me to a tiny stone building at the summit of the castle’s rock. Here an ancient stone hut rested by itself, tucked away in an unnoticed corner. It seemed the perfect spot to find hidden treasure. Excited, I hesitantly opened the door and entered. It was an exquisitely decorated chapel inside over which a spiritual quiet reigned. I had unwrapped a prized jewel: this turned out to be St. Margaret’s chapel, one of the original buildings constructed inside the castle. Built in honor of Margaret, an eleventh century Scottish princess, the simple stone chapel holds gorgeously appointed stained glass windows depicting Scotland’s heroes. In spirited, jeweled tones, the windows breathe life into the plain structure.

In finding St. Margaret’s chapel, I had stumbled upon my own treasure. Though not as significant as Sir Walter Scott’s discovery, the ancient sanctuary which I had all to myself was as precious and meaningful to me as the honors of Scotland. Inside the monumental and mammoth Edinburgh Castle, so steeped in history, my little chapel gave me a warm, personal atmosphere in which to soak in the centuries of tumultuous events that transpired here.

Amid a citadel used to siege and bloodshed, I had found a corner of peace and harmony, a refuge of loveliness.

I had succeeded, thanks to my inspiration, Sir Walter Scott, in finding my own crown jewels in Edinburgh.

Slainté, Walter Scott!
The only way to end such a triumphant expedition was to head to the nearest, coziest pub in Edinburgh and celebrate my good fortune with a tasty bottle of single-malt Scotch. It’s what Sir Walter would have done after his mission. No doubt he had spent many hours at the local pubs while he lived in town gathering legends and folklore from his neighbors to turn into poems. I had a tale of my own to tell anyone who wanted to hear. All I asked for was that they buy me the first round.

Edinburgh is full of history but seeing the city through the eyes of one of its hometown talents, Sir Walter Scott, provides a romance to the streets and hills. Without Sir Walter’s literary contributions the world would not have experienced legendary Scottish romances. Scott’s plays and poems have represented a nation, transforming its personality into lyrical words.

To discover more about the many facets of Edinburgh, join our garden tour in “Bespoke Traveler Journal: On Garden Paths.”