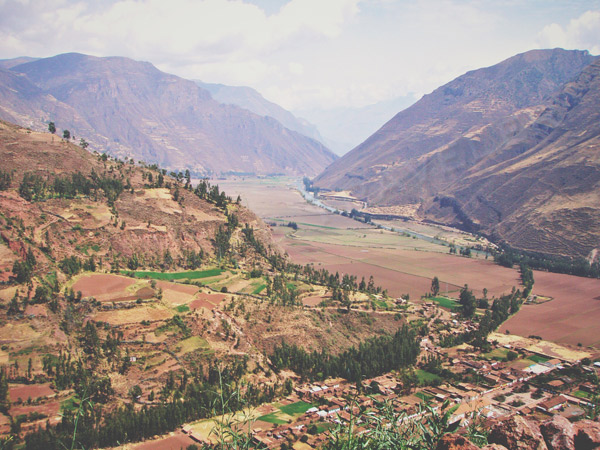 On a map, the town of Pisac, Peru is positioned thirty kilometers northeast of Cusco. On a map, I see the single road traveling down from the Inca capital’s peak, winding through the wrinkled hills overlooking their heartland, then turning sharply at the Vilcanota River before crossing it to enter the village. Looking at a map of Pisac’s handful of gridded streets while standing in the middle of one of them, I am forced to conclude that maps only tell the stories we want them to tell. This is not to say that I dislike maps. I am in the vast camp of those who think maps are fascinating artifacts. I am drawn to the dusty and irrelevant ones lurking inside forgotten trunks and desiccating atlases. I thrill at the chance to use one when I am hiking. Yet I realize that while maps can tell a vast array of tales: about geopolitical ambitions, about socio-economic powers, even about our need to define where we are, they cannot unfold the narratives I encounter within the place, nor can they speak about the spaces in between.

Every Sunday this inconsequential pueblo explodes into life at the mercado. Fruits, vegetables, and dyes stand in harlequin confusion next to alpaca shawls and a thousand handcrafted gewgaws. Stalls line the street and fill the square; colors run riot, colors not depicted in any cartographer’s representation of Pisac. On paper the town is depicted in drab green and beige, its nuanced elevation changes a concentric number of crinkly lines radiating towards the edge. On Sundays, this destination is anything but muted. It is a lively meeting place for people to exchange news and goods, a water cooler where they can share stories and chicha, a signpost at which to compare last year’s corn with this year’s. This is a crossroads for the farmers, traders, and crafters of the Urubamba Valley who honor their traditions. It is also a vortex where the rumble of large buses drowns out the human element and where innumerable tourists desire to capture and record a dissipating way of life. Pisac’s famous market both endures despite the modern intrusions and is imperiled because of it, which is a complex story no map can divulge.

There is more to Pisac than its weekly emporium, something else I discover by looking outside of my handy cartogram. Like any hardworking agrarian village, life in the streets happens in the subdued moments. Dogs snooze away the lazy afternoon, children squeeze in their precious playtime hours in the dusty blind alleys. Families in their traditional best sit upright on hard wooden benches to listen. The Sunday speech tells them to be joyful because they have been promised salvation. I watch the stern, deep-lined faces around me: they seem unmoved by the message, their thoughts hidden deep beneath timeworn expressions. I wonder what other homilies these Quechua have listened to and which of them they have kept in their hearts. On a map of world religions one would identify Pisac as Catholic. However, the harshness of poverty, the exigencies of harvest time, and the comfort of a close-knit community supplant the Sunday sermons. These realities cannot be discerned through any Mercator projection or infographic.

Like many Incan sites, Pisac also boasts the remains of astronomic and ceremonial edifices located upon its terraced hills. I ask one of the stocky sunburnt men lounging upon a plastic chair at the edge of the bazaar for directions to the ruins. “Turn at the place where the old tree lives then count three houses before making another turn. Follow the road to the church, turn left and go up.…” His instructions are clear, but it dawns on me that whatever our native tongue, we tend to orient ourselves not by the streets named in an atlas but by the everyday objects which surround us.

“Our knowledge about a place is rooted by our associations with the landmarks that make it memorable to us.”

In this way we inextricably make the place our own, molding it to the essence of our inner selves. In my travels, I have continually seen how important a location can be, as significant as the people who live there. Understanding the landscape they call home has been monumental to me in getting to know locals. In his book “Unruly Places,” Alastair Bonnett discusses how love of place, whether familiar or foreign, is ingrained in all of us. We not only take delight in shaping our environments, but we form our beliefs based on them. “People’s most fundamental ideas,” Bonnett writes, “don’t happen anywhere or nowhere; they are fashioned within and through their relationship to place.” As someone with a more transient lifestyle, I agree with him. I am still defined by physical locations: the land of my ancestors, the courtyards where I grew up, even the many countries I have traveled through continue to shape me. No map can capture this network of destinations which makes me who I am.

Maps by their nature are fixed. They present the world as it is at a certain stage in time; they show the static, momentary view of a place. Looking exclusively at maps, one might believe that the world was in stasis, dominions unchallenged, borders unchanged, every corner measured and recorded. Studying current digital images of our planet who would know that once this sleepy village was the military outpost of a ruthless empire, or that once Peru did not exist as a country? There is a great divide between how a place is represented and its genuine multifarious nature. While I will always have a fondness for maps and the tales they begin to tell, I shall have to hunt out the roads that reveal them to me on my own for they are never charted. “It is not down on any map; true places never are,” Herman Melville wrote in “Moby Dick.” Perhaps this is the reason why I am both intrigued by what maps tell me and fascinated by what they hide. I will never believe that there is no place left to be discovered, that all has been surveyed. Beyond the borders of every cartogram is an unexplored world awaiting us.

The Inca preferred to think of distance in terms of time rather than an amount of space between two places. While they used body parts to calculate lengths between destinations, they more accurately portrayed how long it would take someone to walk that length. The Inca did not create maps in the conventional sense. Instead, they depicted this information as a series of numerical knots on quipu strings.

Have you ever gotten lost while using a map? Do you rely on maps when traveling?