Music of the Spheres at Teotihuacan 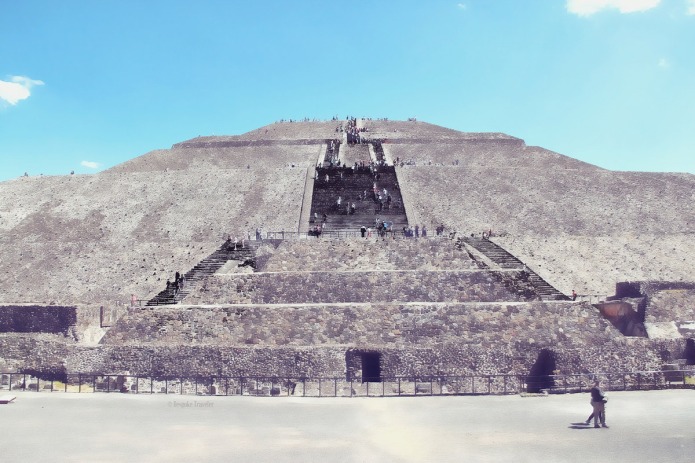 “This is the Avenue of the Dead,” the guide, Miguel, announces. We are in the center of Teotihuacán, a pre-Columbian conurbation in Mexico. On both margins of the vacant thoroughfare stark pyramids crest against the unblinking sky. Bleached by erosion, surrounded by asphalt and scorched grass, the cobbled structures seem part of the Mexico landscape rather than the labor of man. I attempt to picture this deserted rubble as Miguel describes its heyday: blocks of multi-family apartments stacked against each other, piebald murals of stars, snakes, and cryptic beasts garishly decorating the talud-tablero, throngs of traders, artisans, and farmers hurrying down the sacred boulevard.

A thrumming like the pitter-patter of drizzle sweeps out ahead of us. I gaze up but the glaring sun and cottony clouds hold no precipitation. “Did you hear that?” Miguel asks, with his sphinx smile. “Come with me and I will show you something clever.” We hustle after him to face the courtyard in front of the Pyramid of the Moon. Standing at the bottom Miguel claps his hands; seconds later the tattoo of rainfall reverberates. Our company eye each other in disbelief. “These platforms were natural amplifiers allowing large number of spectators to attend ceremonies. Dependent on the noise and its location, different echoes will be produced. Some sound like the iconic quetzal, others resemble thunderstorms. Notes essential to the pageantry of the priests.”

“How did they design this arena for those specific strains?” a long limbed blond inquires.

“They had an intense knowledge of mathematics and astronomy,” Miguel replies. A stocky chap in a baseball cap leans into me.

“More likely it was aliens,” he whispers. I glance at him, startled, then smile — unsure whether this is a joke. What I am witness to is the sophistication of the sixth grandest metropolis of its age. Yet, I also cannot reconcile such acuity with the rack of crushed skulls or the misshapen skeletal scraps — preserved remnants of a civilization steeped in sacrifice.

In an effort to persuade us of the quadrangles’ sonic efficacy, Miguel advises us to experiment with commotion. “Try your own songs,” he urges. Several of our group disperses to various points where they snap fingers, whistle, and shout. The plaza fills with a fiendish din, forcing me to wander off. I climb the terraces of the Pyramid of the Sun to escape the racket.

As I mount I begin to notice the calculation behind its profligate construction. How many were commanded to quarry this vast quantity of boulders? How many trees were burned for the upkeep of these scarped risers? Above all, who were the leaders capable of such authority? Assured of their divine incarnation, they effectively commanded projects of a colossal scale. I wheeze my way up each flight, marveling at the scope of what once existed. Apparently sheltering diverse ethnicities, Teotihuacán must have presented immense wealth and opportunity to motivate so many from miles away to settle, to offer themselves in oblation. It is a testament to the place and its inhabitants that seven hundred years later when the Aztecs stumbled upon its ruins, they credited gods with forging this site.

Progress has a peculiar way of skewing perspective. As monumental shifts occur in the ways we live and work, future generations tend to view bygone societies with hindsight’s scorn. It becomes impossible to conceive that our ancestors indulged in intellectual discourses, held nuanced religious ideologies, or operated under civil complexity. Staring out at the detritus of a culture I cannot grasp from the summit of the pyramid, I too question their prowess. “How is it possible?” I wonder, briefly entertaining my travel associate’s extraterrestrial theory. I want to delude myself that our technological, medical, and aesthetic advancements are solutions to inequity, pollution, and corruption. I want to presume that somehow we are managing better than our forebears, that we finally possess the key to unlocking humanity’s improvement.

My explorations of Teotihuacán antiquity has revealed that its citizens reckoned vertically, they believed creation happened in layers. They understood some truths I have lost knowledge of in the modern world: the indivisible quality of good and evil, the transcendent state of death, the universe’s cyclical character. Artists of that period designed emotive obsidian masks, painted flamboyant facades of gold and jade rivaling today’s masterpieces. Nevertheless, they were no more successful than us at forecasting the consequences of their actions. They too were convinced in the correctness of their interpretations, fell prey to their avarice, failed to balance economics with bureaucracy. 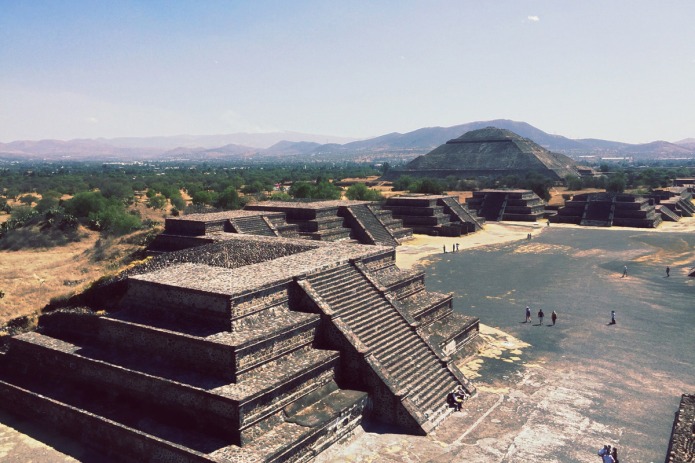 Descending from the apex of the Sun Pyramid, I perceive an eerie growl emanate from below. It is a jaguar call pulsating up through the residuum. As I alight the last tread and turn the corner the snarl repeats from one of the souvenir sellers. He holds in his mouth a replica of an atavistic whistle discovered with Aztec burials. The eldritch trinket is a powerful ghostly reminder that so much of the past can never be fully envisaged. What was the aroma pervading through these streets? How did the music of their language declaim? Which flavors dominated their gastronomy? Without such insights these first millennium occupants abide as paper ghosts.

Observing Teotihuacán through my twenty-first century outlook, how do I process its mixture of refinement and savagery? What wisdom, if any, can I glean from it? Is it advisable for me to consider this city-state anything other than a bizarre epoch best left to the dust? The danger of me placing my biases upon incomplete evidence is that it renders this community as a caricature, obsoleting any enlightenment. If I am to appreciate Teotihuacán in its entirety, I can neither idolize its cosmopolitanism nor be an apologist for its sadism. The more I travel the deeper I comprehend that history is a conversation. There is rarely a standard set of rules or facts to which it adheres. Instead yesteryear continues to get rewritten as we unearth the other half of every circumstance, as we adjust our interrogations, as we engage with the mortal contradictions altering political strategy.

In 550 CE much of Teotihuacán’s important buildings were sacked. Though it is unclear as to the reason, some archeologists believe that internal revolt was responsible for the city’s demise. Lime, an alkaline adherent, was used extensively to maintain and expand pyramids and its manufacture depended on wood fuel from neighboring jungles. Deforestation led to droughts, civic unrest, and the collapse of Teotihuacán.

Is it possible to learn from history or are we doomed to repeat it? How do we construe past cultures without imposing our frame of reference onto them? If you have been to Teotihuacán or any other Mesoamerican locations, share your thoughts about them in the comments below.